How Do Shingles And Chicken Pox Differ?

Shingles and chickenpox are itchy, painful, and cause an immense amount of discomfort for those they affect. It is tempting to call them the same, given their similarities. However, they are two very different illnesses.

We commonly associate chickenpox as a prevalent childhood virus. It starts with a fever or fatigue. Then, after a couple of days, the tell-tale itch, a blistery rash forms on the face, chest, and back. Then it spreads over the rest of the body and continues to itch before drying out, scabbing, and falling off.

Cause of Chicken Pox

Chickenpox is caused by the varicella-zoster virus. It is highly contagious. In fact, a person with chickenpox is contagious 1 to 2 days before the rash appearing, and they remain contagious until all blisters have crusted or scabbed. Close contact with someone, even just breathing in the viral particles, is enough to spread it. It can take anywhere from 10 to 21 days to begin presenting symptoms after it’s transmitted.

It is generally thought that you can never get it again once you have chickenpox, but a small handful of people do become ill with it again. You can avoid infection by getting vaccinated, but some who are vaccinated may still get it. That being said, vaccination is still the best way to prevent illness. 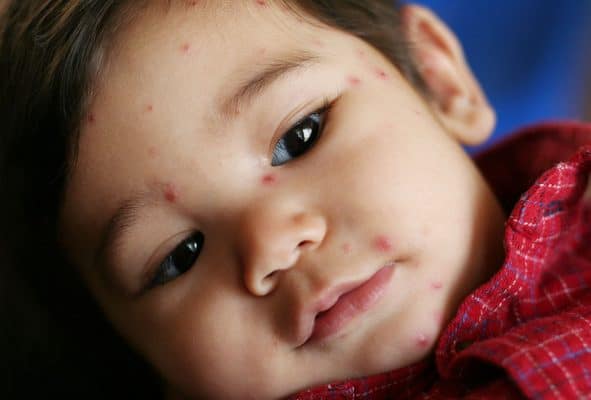 There are many things you can do to treat the symptoms of chickenpox at home. Oatmeal baths, baths with cold water and uncooked oatmeal, soothe the skin to minimize the itching. Calamine lotion can also be used to soothe skin and discourage scratching. Acetaminophen can be used to reduce fever, but stay away from aspirin. Aspirin-based products can lead to complications that, in some cases, have lead to death.

If you have had chickenpox as a child, there is a chance you will possibly develop this illness at some point in your lifetime. Also known as herpes zoster, it occurs when the virus causing chickenpox reactivates in the body. Though this is sometimes called adult chickenpox, you don’t necessarily have to be an adult to get it.

It starts as a tingling, itchy sensation. Then a single stripe of painful blisters forms on the left or right side of the body. On occasion, it may present itself on the face as well. The blisters are sensitive and very painful. Once they burst, they will crust over, similar to chickenpox. Once it crusts, you are no longer contagious. However, keep it covered, wash your hands regularly, and avoid contact with other people until it is fully healed. It should take about 2 to 4 weeks to clear up after it scabs.

Herpes zoster is contagious, but probably not in the way that you’re thinking. A person with it will not infect someone else with the same illness. Instead, they will infect them with chickenpox if they have either been vaccinated against it or have never had chickenpox before. Therefore, it is important to take the same precautions as one would take with someone with chickenpox.

They both come from the same virus, varicella-zoster, but their effects are quite different. Shingles will not spread to the entire body. It tends to stick to one side of the body in a single stripe, rather than spreading to cover it entirely. Though there are some tingling and itching, it is often much more painful all around for the person infected. It can also lead to more severe problems such as eye damage and even blindness if the rash is near the eye and not treated professionally. In some instances, nerves become permanently damaged. You may also get it multiple times throughout your life. Thankfully, there is a vaccine for it that can prevent you from ever having to experience this.